The celebrated Northern Story ‘Two’ by Jim Cartwright lands on the stages of Hull Truck Theatre and Stephen Joseph Theatre this March.

found at the bottom of a glass.

Written in the 1980’s but as real today, this much loved story by celebrated Northern playwright Jim Cartwright, takes the audience through a spectrum of human emotion, painting a grittypicture of life in a working class town through intimate insights into the lives of a vivacious northern pub. 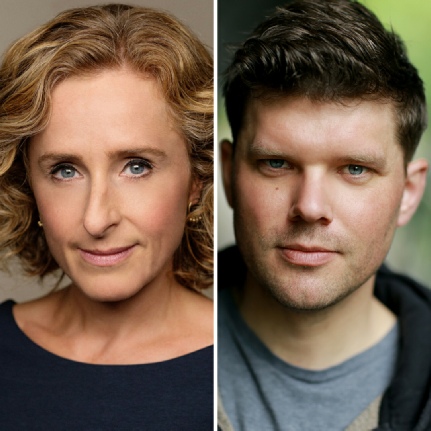 set in a northern local. “It’s a beautiful kaleidoscopic love story that takes the audience on a night out in a local pub, where they witness characters hopes, dreams and desires spill out into the night. All building to its emotionally charged climax where our central characters of the landlord and landlady face up to a devastating truth that has held them captive for 7 years. It’s a great night out in the theatre and I’m thrilled that we have two exceptional actors in Nicola and Matthew, who will play 14 characters between them and I can’t wait for everyone to see them in action with Jim Cartwright’s unique Northern Voice,” said Mark Babych Hull Truck Theatre’s Artistic Director.

Nicola Stephenson is best known for her television work, Nicola first rose to fame as Margaret Clemence in Brookside. In this role, she made history by being part of the first ever pre-watershed lesbian kiss. Sharing the scene with Anna Friel, it was an iconic moment for the LGBTQ+ community and was viewed by 6 million people when it aired in 1994. Her most recent credits include the lead in Safe House (ITV) and a series regular role on CBBC’s The Worst Witch as well as roles in The Alienist (Netflix), Silent Witness (BBC) and Agatha Raisin (Acorn TV). Other credits include Home Front (ITV), Waterloo Road (BBC), Larkrise to Candleford (BBC), Emmerdale (ITV), The Chase (BBC), Clocking Off (BBC) and Midsommer Murders (ITV).

She also has many brilliant stage credits. Most recently she appeared in Stepping Out directed by Maria Friedman at Theatre Royal Bath and The Vaudeville Theatre, West End. Previous credits include His Girl Friday and Edmund (National Theatre), A Patriot For Me (RSC), War Horse (West End) and One For the Road (Royal and Derngate, Northampton).

Mark Babych will be directing this version of TWO, very appropriate considering he was sharing an office with Jim Cartwright as the play was being written.

Mark said, “I’m really looking forward to working on TWO – it’s a play I’ve known for a very long time and was privileged to see the first production of it as a young director, cutting his teeth in the theatre where the show began its life. I’ve been waiting for an opportunity to direct the play again and having the opportunity to stage this in the round here at Hull Truck Theatre – and then at the SJT in Scarborough – gives me a chance to explore the play anew and allows the audience to experience it in a dynamic and exciting new space.”

To help the show make a seamless transfer to the Stephen Joseph Theatre, this production will be staged in the round. Hull Truck are building a whole new seating bank under the arch of the stage, meaning patrons can opt for a whole new view whilst the action unfolds within the pub.

They produce and present inspiring theatre that reflects the diversity of a modern Britain. Providing the resources, space and support to grow people and ideas, are an ambassador for Hull, a flagship for Yorkshire and a welcoming home for local communities.

Through their work with schools and local communities they engage with thousands of young people, disabled groups and adults, offering opportunities to participate in the arts, whether as the first step into a career, a way to build confidence and meet new people, or as part of a rounded education.

They are continuing the momentum of Hull 2017 to tell inspiring stories dug from the heart of Hull, alongside tales from the wider world, that reflect the diverse range of communities and creative voices that populate the nation. They are ambitious and bold, committed to core values of Inclusion, Innovation and Integrity.

The Stephen Joseph Theatre has produced accessible, high-quality theatre since 1955 when it was founded by the theatrical pioneer who gave it its name.

In its 65-year history it has produced over 650 plays, many of them new, continuing Stephen Joseph’s aim of encouraging new writers; one of the earliest was a young actor and stage manager called Alan Ayckbourn.

Stephen’s commitment has become an important core value at the SJT, carried on through the successive leaderships of Alan Ayckbourn and Chris Monks, and progressed by current Artistic Director Paul Robinson.